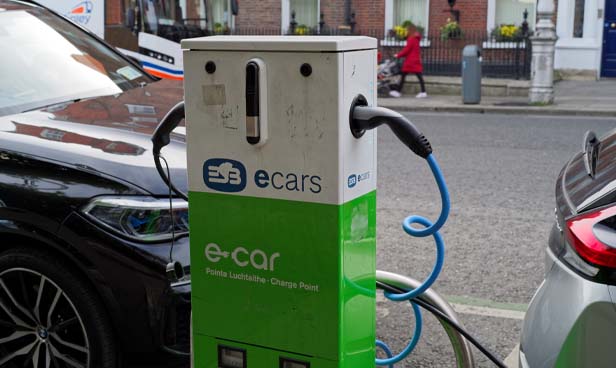 In Ireland, 20 per cent of new car sales will be EVs by 2023, but the ambition to have one million EVs on roads by the end of the decade may be reliant on post-pandemic purchasing behaviours.

The Climate Action Plan’s target of almost one million EVs on Irish roads by 2030 will require a significant uplift in new car purchases, which figures show have been hit by the pandemic.

The number of electric vehicles sold in Ireland doubled in the first half of 2021 compared to the same period the previous year, but the number of overall new vehicles purchased remains over 20 per cent lower than pre-Covid levels.

Despite the significant uptick in new EVs, meaning a market share reduction for new diesel and petrol vehicles, a reduction in overall sales of new vehicles, largely attributed to the pandemic, means that EV penetration will need to significantly increase if Ireland is to reach the Government’s one million target by the end of the decade.

Statistics from the Society of the Irish Motor Industry for the first half of 2021 show that while the majority of new cars sold still tend to be diesel (36 per cent) and petrol (32 per cent), 8,498 EVs sold to the end of June 2021 represents a 178 per cent increase compared to the same period in 2020. 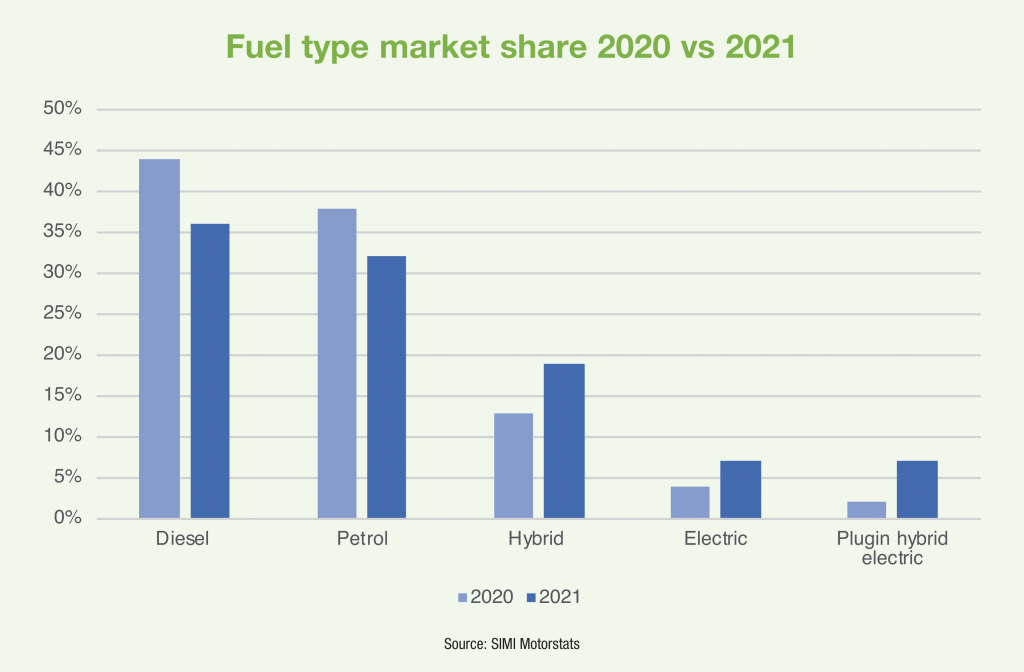 New car sales in Ireland are estimated to be around 100,000 for 2021, rising to 125,000 for 2022. The pandemic has disrupted usual trends in new car sales and despite evident signs of recovery in the form of rising levels of purchasing from 2020, the number of new cars being sold still remains below the 150,000 average figure which most anticipated. If new car sales remain at these levels, then EVs would need to achieve almost 100 per cent penetration if the 2030 target is to be reached.

“The number of electric vehicles sold in Ireland doubled in the first half of 2021 compared to the same period the previous year, but the number of overall new vehicles purchased remains over 20 per cent lower than pre-Covid levels.”

It is possible that the Government’s target was consciously overly ambitious, providing the catalyst needed to kickstart the transition to more renewable private transport.

As well as an ambitious target and a commitment to ban the sale of new petrol and diesel cars by 2030, a number of factors appear to have played a role in a greater number of consumers opting for EVs over traditional petrol or diesel fuelled new vehicles.

Environmental awareness has undoubtedly increased in recent years and the pandemic appears to have served as an opportunity for citizens to evaluate their behaviours and patterns. Additionally, the EV market has evolved with more manufacturers committing to EV production and eventual transition away from fossil-fuelled vehicles. This has led to greater choice for consumers but also faster development of technology, meaning vehicle driving range is increasing significantly.

Supplementing this easing of ‘range anxiety’ fears of EV drivers or prospective drivers is the extensive enhancement of Ireland’s public EV charging network. ESB operates and maintains over 1,350 public charge points across the island of Ireland through ESB ecars. The Government’s Climate Action Fund provided €10 million, matched by ESB, to expand and enhance the public charging network. This has enhanced not only the reliability of the network but also introduced some rapid chargers in towns and cities throughout Ireland.

The Government has also taken some steps in a bid to enhance the uptake of electric vehicles, however, many feel that the upcoming Climate Action Plan must provide more extensive incentivisation if Ireland is to reach its target. Recent government initiatives include regulation changes on new and existing buildings beyond dwellings to ensure recharging point installation, an on-street public charge point scheme for local authorities, seeking to remove uptake barriers for those without home charging, benefit-in-kind tax relief for battery electric vehicles, grant support for the private purchase of EVs (in April 2021 government support was re-refocused to prioritise battery electric cars) and an Electric Vehicle Home Charger Grant.

With levels of new vehicle purchases below predicted levels, the Government has an opportunity to re-stimulate the market through the incentivisation of EV take up in the coming years.