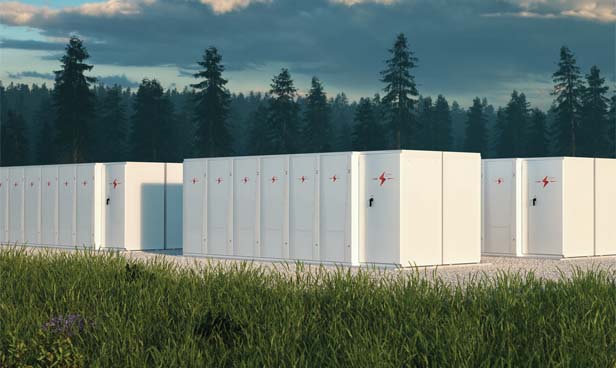 Over 2.5GW of grid-scale battery storage is in development in Ireland, with six projects currently operational in the country, four of which were added in 2021.

The operational use of the already-installed capacity of grid-scale battery storage was displayed in May 2021, when the frequency of Ireland’s electricity grid dropped below normal operating range. Two of the country’s six large-scale battery storage projects were called upon to help and had injected power into the network within 180 milliseconds, stabilising the network.

The 11MW system at Kilathmoy, the Republic’s first grid-scale battery energy storage system (BESS) project, and the 26MW Kelwin-2 system, both built by Norwegian power company Statkraft, responded to the event, which was the longest under-frequency event in recent years. The electricity grid went out of bounds of 49.9Hz – 50.1Hz for more than 14 minutes.

Battery storage can offer a source of support to the electricity grid, enabling the addition of more wind and solar power over time. The Irish energy system today is using gas or coal power plants for energy purposes, rather than as a means of providing support services to the grid. This means that wind power plants are then prevented from providing electricity to the grid to make way for those thermal resources. Enabling emissions-free methods such as battery storage for the provision of these services instead would facilitate the use of renewable energy in several different ways.

Despite the fact that energy storage is regarded as relatively new in Ireland, the 2020 goal of 40 per cent renewable electricity and energy storage project developers have been successful in winning contracts in EirGrid’s DS3 market. The DS3 has procured 14 different network ancillary services under a fixed tariff regime, although it is due to expire in three years. However, demand for grid service assets such as battery storage is likely to multiply, necessitating the provision of a DS3 type scheme from 2024 onwards.

A pipeline of over 2.5GW of grid-scale battery projects has now emerged in Ireland, with capacity projections increasing by 25 per cent in recent years. Over 75 per cent of this pipeline is made up of standalone projects, but increased interest in the possibility of colocation with solar and wind projects has been reported since 2018, although these are smaller in capacity.

The largest part of the pipeline in Ireland is made up of projects larger than 20MW, the majority of them standalone. The DS3 scheme has so far favoured larger projects, with two 30MW projects and one 50MW securing DS3 Volume Capped Contracts in 2019. By the end of 2021, there is projected to be 350MW operational on the market.

A further group of projects, totalling circa 250MW have both planning permission and grid connection contracts, is ready to progress, with the potential for their construction in either 2021 or 2022. The largest category of projects are those with planning consented, totalling over 1.4GW in operational capacity. Planning for battery storage projects is a typically shorter process than the equivalent for wind and solar projects, with the next step for those with planning consent an application to the ESB or EirGrid for grid connection.

The ESB states that it “aims to develop a pipeline of projects to deliver large scale batteries as well as additional flexible enabling technologies” and has so far announced the development of its first major battery projects at existing sites in Inchicore, Dublin and Aghada, Cork. These projects will deliver 60 MWh at Inchicore and 38 MWh at Aghada Generating Station, with the ESB also planning to develop further battery storage projects in South Wall and Poolbeg, both in Dublin.