Towards a net zero carbon gas network for Ireland 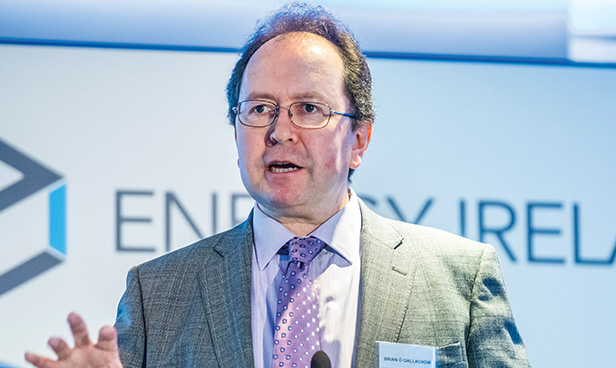 Increased ambition is welcome and a focus on energy efficiency and electrification is essential but a serious discussion on bioenergy and flexibility measures is required if Ireland is to bridge the existing gaps to target in the energy transition, says Director of MaREI Brian Ó Gallachóir.

Focussing on the non-Emissions Trading System (ETS), mandatory targets for each of the European Union’s member states, Ó Gallachóir, Chair of Energy Engineering in UCC, outlines the target for Ireland to achieve a 30 per cent reduction in emissions by 2030 relative to 2005 levels.

Currently, Ireland’s greenhouse gas (GHG) emissions are around 61 Mt per annum, the majority of which (72 per cent) are non-ETS emissions, a larger share than the EU average (60 per cent) and attributed mainly to agriculture-based emissions.

Simplifying the makeup of Ireland’s non-ETS emissions, Ó Gallachóir outlines the required focus on “cows, cars, trucks and homes”, explaining that Ireland’s low ranking in the league tables in comparison with other member states is largely associated with a lack of ability to meet the non-ETS target.

In the period 2013-2020 Ireland’s allowable carbon budget is 338 Mt of CO2. “We’re exceeding that target by about 12 Mt currently and it’s why we have purchased some credits and will be purchasing more to offset this.”

He adds: “In the period to 2030 we also have a gap to target and that gap is not so much how far off we miss the point by 2021-2030, it’s over the full period to 2030. Over that period, we have approximately 100 Mt of emissions that we need to avoid. In this instance, early action is critical.” 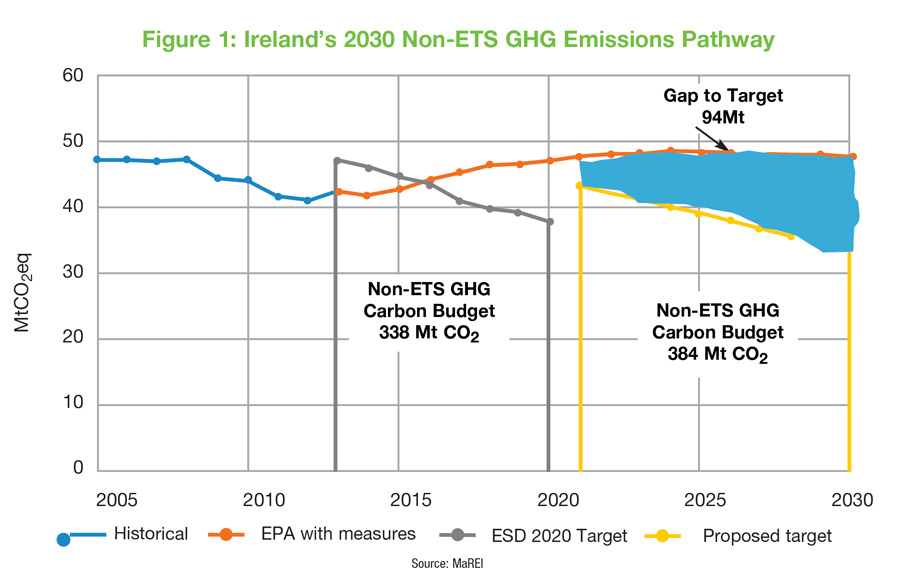 Discussing why Ireland is so far away from the current targets, Ó Gallachóir says that a number of dimensions have contributed, including population and economic growth driving energy consumption, as well as a legacy of a lack of political leadership on climate action. Another dimension is the focus that has been applied to the decarbonisation of electricity, to the point where Ireland are now a world leader in the integration of wind energy into the power system. However, this success does not contribute to the non-ETS sector, where Ireland is failing.

Transport too, is a big contributor, explains Ó Gallachóir. The transport sector has grown significantly in Ireland, up 24 per cent in annual km driven since 2005, and while there have been moves to transition the private fleet towards decarbonisation, there have been next to no measures around freight, a sector also likely to grow.

Lastly, Ó Gallachóir says that heat has been a problem. While the introduction of “great” building regulations in 2005 were welcome, Ireland has built very little houses post-crash. In addition, of the 23,000 retrofits happening annually, most are of a shallow nature and up until last year Ireland offered no renewable heat supports.

“These various dimensions are why we have to date failed in reaching our non-ETS targets, however, there are a number of areas we can focus on,” states Ó Gallachóir.

Outlining how Ireland can address the 94 Mt gap to target, he says: “Energy efficiency is a key one and the electrification of heat and transport is critical. Both are strongly emphasised in the Climate Action Plan and it’s great to see the ambition that’s there, even if there are concerns about the ability to meet the targets set.

On energy efficiency, Ó Gallachóir says that prior to fresh ambitions in the Climate Action Plan, an 81 Mt gap has been identified. The National Development Plan increased the deep retrofit ambition from 30,000 to 45,000 homes per year and the Climate Action Plan has now raised that further to 50,000. This will see a noticeable rise in the carbon emissions abated from residential properties, however, a significant gap will still exist.
Ó Gallachóir also highlights concerns around the impact of deep retrofits given that not all homes are equal and each will have a different starting point in terms of the carbon efficiencies that can be garnered. 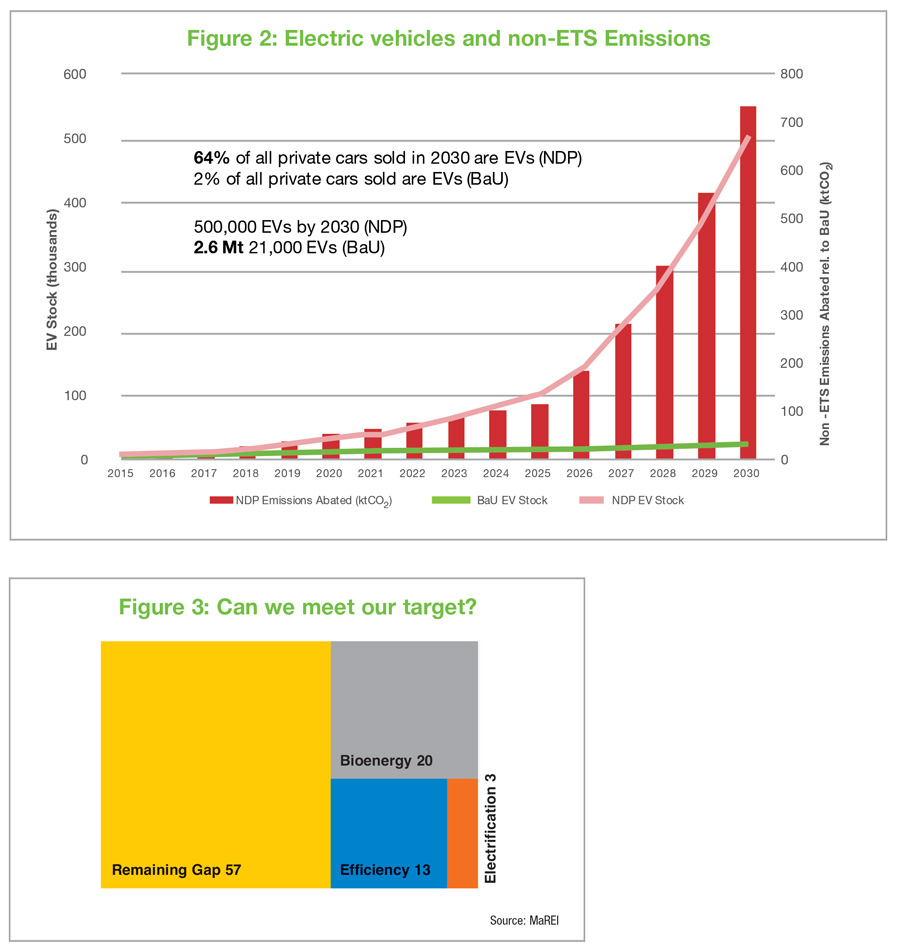 Turning to the electrification of heat and transport, the academic says that much like the retrofit of buildings, the process takes time. The NDP set out an ambition for 500,000 EVs on the roads by 2030 and the recent plan has increased this ambition to 960,000. Reaching this ambition would see over five Mt Non-ETS emissions abated but to reach this target will take a significant amount of change from business as usual.

Ó Gallachóir adds: “It’s a similar story for heat pumps. The heat pump ambition has grown from 170,000 homes in the NDP to 400,000 in the all-of-government plan in terms of retrofitted homes. In both, the target for new homes is 200,000.

“Collectively, the electrification piece leaves an estimated 91 Mt gap to target. Again, the scale of the challenge of what is involved to meet this target is very significant.”

Discussing bioenergy, Ó Gallachóir identified two significant areas in biofuel for transport and biogas for heat and transport. “The interesting point with these, compared to the other measures is that they happen on the supply side and don’t require active decisions by the end user. Biofuel blending is happening and has been happening for some years but it’s seamlessly happening on the supply side.”

Ireland has an estimated remaining gap of 74 Mt after bioenergy, even when including the biogas target of 1.6 TWh by 2030, included in the NDP and adopted in the Climate Action Plan, and the Gas Network Ireland ambition to increase the renewable gas blend in the gas system to 20 per cent of use by 2030. Much of the liquid biofuel ambition is also pre-existing, meaning that the estimated gap to target is unlikely to change significantly.

On flexibility measures, Ó Gallachóir highlights that on land use, land-use change, and forestry (LULUCF), Ireland has already achieved around 22.5 Mt of its possible 27 Mt flexability allowance for 2030, provided forests are maintained. The Climate Action Plan has also raised ambitions to increase forestry in that period.

Ireland auctions ETS credits and the State could forego some of the auctioned revenues and use the credits to meet targets. It’s estimated that this is limited to some 19 Mt.

“Based on the measures that we could do, without looking at the flexibility measures and taking in to account the growth in the efficiency and electrification elements, we’re still talking about a gap to target of about 45 Mt. 27 Mt of that could come from the flexibility measures but we’re still left with a gap of 11 Mt but that doesn’t mention agriculture. Teagasc have done some analysis to indicate that we could get around 18.5 Mt abated from agriculture.”

Ó Gallachóir concludes: “The scale of the overall challenge is significant. Energy efficiency and electrification measures are essential but not sufficient to meet the target. We need a serious discussion about bioenergy, which got little attention in the Climate Action Plan. Without a significant increase in ambition, flexibility measures may prove essential.”