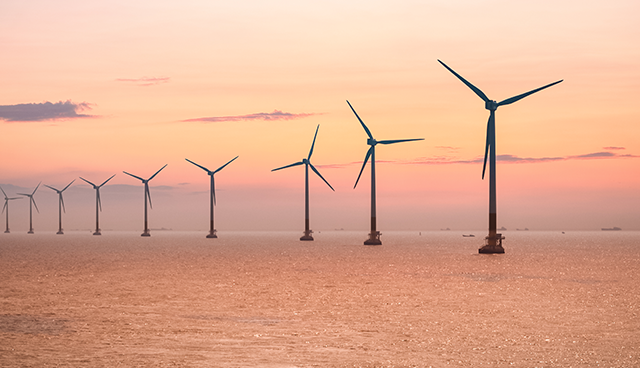 Intended to be the centrepiece of a new streamlined consenting regime which will enable the swift deployment of offshore wind energy infrastructure, ultimately delivering 5GW by 2030, the Maritime Area Planning Act 2021 (MAP Act) was signed into law in December 2021.

The Maritime Area Planning Bill 2021 passed all stages of the Oireachtas on 17 December and was enacted on 23 December 2021.

It was heralded by government as “the biggest reform of marine governance since the foundation of the state”. The Act provides the legal and administrative underpinning for a new planning regime in the maritime area, facilitating the development of offshore energy. It is intended to strike a balance between unlocking Ireland’s offshore wind potential, while also protecting the marine environment.

Replacing existing development consent regimes with a single consent principle, or Maritime Area Consent (a seabed lease), it will enable development consent, or planning permission, with one environmental assessment. The new processes provided for within the Act will apply to foreshore licences and leases, as well as planning permissions for marine projects, from seaweed harvesting to offshore renewable energy infrastructure.

Significantly, the legislation seeks to ensure that the consent mechanism for offshore renewable energy projects:

Alongside its enforcement functions, MARA will assume responsibility for issuing foreshore licences from the Minister for Housing, Local Government and Heritage. Likewise, the authority will also be empowered to issue Maritime Area Consents (equivalent to foreshore leases).

Beginning its work in January 2022, the MARA implementation committee has been allocated a €2 million budget. Until MARA is established (Q1 2023) and resourced, the Minister will retain responsibility for granting applications for licences and leases to legacy projects or “special MAC cases”.

Similarly, while aquaculture activities will continue to be processed by the Department of Agriculture, Food and the Marine, the Minister has indicated that this function will eventually transfer to MARA.

Ireland’s first maritime spatial plan, the NMPF, was published in tandem with the MAP Bill. While undertaking their functions, public bodies, particularly those responsible for issuing authorisation or consent for offshore activities, must comply with the objectives of the NMPF.

Providing for Designated Maritime Area Plans (DMAPs), or portions of the maritime area which are selected for specific usage, the Act also requires applications for Marine Area Consents (MACs) within DMAPs to be subject to a specific process.

The MAC regime requires that developers acquire a MAC prior to development permission applications to An Bord Pleanála. Therefore, MACs operate as a stepping stone into the development consent system and a decision on a MAC application must be made within 90 days.

Within Schedule 5 of the Act, there are several criteria used to determine approval for MAC applications. These include:

Seven offshore wind projects granted “relevant project” status in May 2020 – i.e., offshore renewable energy projects which hold a foreshore authorisation, are in the process of applying for foreshore authorisation, or are subject to an EirGrid connection agreement – can be invited by the Minister to apply for the first MACs. It is intended that these “special MAC cases” will contribute to the delivery of 5GW of offshore wind energy by 2030.

In January 2022, Minister for the Environment, Climate and Communications Eamon Ryan TD, launched a consultation the new MAC consent regime for offshore renewable energy. “As Minister for the Environment, I will have the responsibility of inviting Maritime Area Consent applications from an initial batch of offshore renewable energy projects,” he said.

Mirroring the consenting process for onshore strategic infrastructure development, the MAP Act provides that particular offshore developments, such as offshore renewable energy projects, obtain planning permission under the amended Planning and Development Act 2000. Decisions on such applications rests with An Bord Pleanála. Characteristics of this regime include:

Meanwhile, certain activities within the newly defined nearshore (three nautical miles from the high-water mark) will also require planning permission under the Planning and Development Act. However, the adjacent local authority, or coastal planning authority, will be responsible for processing these applications, not An Bord Pleanála.

The MAP Act provides that decisions made by either the Minister or MARA on MAC applications and licences, as well as decisions made by An Bord Pleanála on permissions for offshore development, can be challenged by judicial review. Taken within eight weeks of a decision, any challenge the High Court must first demonstrate both “substantial grounds” and “sufficient interest”.

Regardless of challenge by judicial review, a developer can still apply for and receive development permission from An Bord Pleanála. When the judicial review proceedings have concluded, these permissions may come into effect.

While the Maritime Area Planning Bill 2021 received broad support, in the Seanad Final Stage, concerns were raised by independent Seanadóir Alice-Mary Higgins: “If marine and environmental protection is nowhere in this process, it is a travesty that the Government would go ahead with this process… allowing people to occupy it and carry out different activities as if it is an asset, rather than the part of the planet and the oceans we are responsible for. It is a worrying frame.”