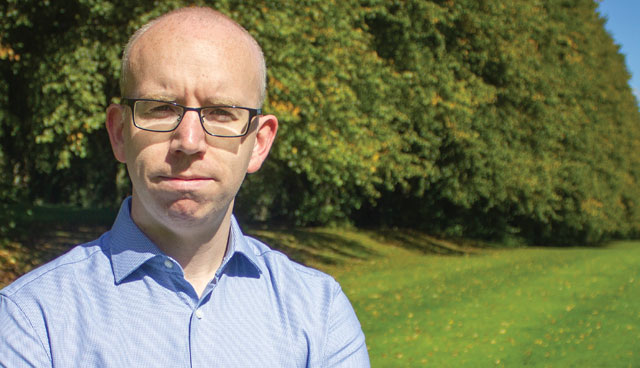 Thomas Byrne, Director of Energy Strategy in the Department for the Economy (DfE) talks to David Whelan about the progress on delivering a long-term Energy Strategy for Northern Ireland to meet a target of net zero carbon by 2050.

Recognised as crucial to delivering the decarbonisation of Northern Ireland’s energy system, work to produce a forward-looking policy pathway for energy has been being progressed, even during the absence of the Executive, up until January.

Urgency in this regard has been driven by the scale of change that has occurred since the publication of the existing energy policy in the form of the 2010 Strategic Energy Framework, not least the Paris Agreement and by the governments in both Westminster and Dublin declaring climate emergencies.

While many might see the task of creating a framework for delivering a zero carbon economy in Northern Ireland by 2050 daunting, Byrne instead views the job in front of him as “exciting”.

Byrne has highlighted March 2021 as a key month for the Department, when it aims to publish an options consultation setting out what it believes are the viable routes to meeting some of the objectives set to be included in a future Energy Strategy.

The foundation for the creation of the future strategy was a call for evidence issued by the Department in December 2019, which Byrne suggests was met with a high number of responses but also a range of responses that extended outside of the energy industry.

The Department published a detailed summary report on the call for evidence in June and Byrne outlines that the focus has now turned to delivering policy options.

“Using the information we received through the call for evidence, alongside the knowledge and expertise that we have in Northern Ireland and the additional research that we are currently gathering, we aim to arrive at robust scenarios and a roadmap for the future of energy,” he explains.

Explaining the importance of these future options being sculpted by continued stakeholder input and not by department officials alone, Byrne outlines the creation of five working groups, each focussed on the specific topics of: heat, power, transport, consumers and energy efficiency. Over 70 stakeholders are represented across the five groups, representing some 30 organisations.

“This continues to be about evidence and analysing that evidence to deliver viable policy options,” Byrne explains.

“The call for evidence delivered a lot of information and we recognise that the decisions we are taking are big decisions across 30 years. So, it’s really important that we get them right. There are some decisions that we can’t take today about the future but we can create pathways to move forward.

“The range of issues to be considered is huge and so what we have done, through the five working groups, is identify four or five key priorities where options have been identified and we’re now developing the evidence behind those options, to shape policy that can be utilised by the strategy.”

Byrne has moved to ensure that the development of the strategy remains transparent and accessible on a wider basis, not just to those stakeholders involved in the working group. The Department is publishing a monthly
e-bulletin, focusing on the five workstreams identified for those groups.

“That’s our way of keeping in touch with the outside world, not disappearing for nine months and coming up with a strategy. Being open, transparent and visible in how we are shaping policy options is very important and we’ll continue to do this up until the options consultation, while also publishing additional research we are taking forward,” he states.

Byrne identifies the scale of the change needed as the biggest challenge facing the delivery of an Energy Strategy by the end of 2021. “These are big objectives. Big changes will be needed to meet a net zero target, including the growth of a green economy which will require changing the nature of our current economy and how it works. It’s important to stress that this is not the energy industry’s strategy but will be for the whole of Northern Ireland.”

The Energy Strategy Director outlines that given the scale of change needed, mechanisms have been devised to ensure that the strategy, when completed, does not become inflexible. 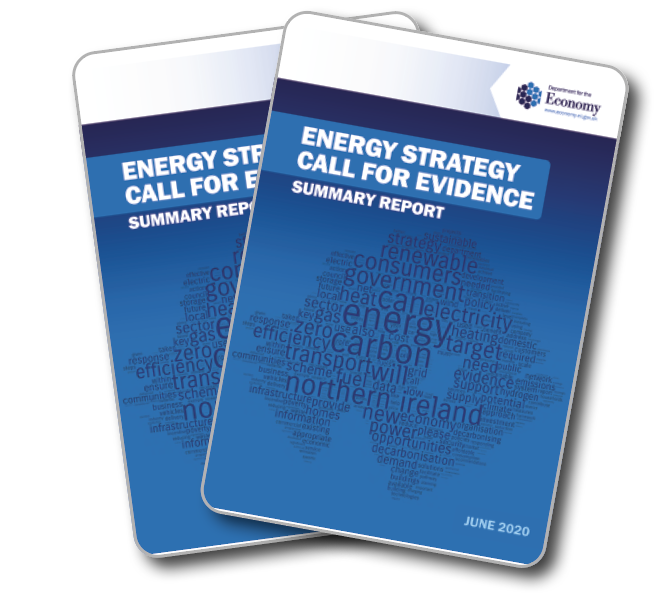 “We have to consider the impact of these decisions on consumers, on citizens and the behavioural changes that we need to bring forward. However, we also recognise that in bringing forward this scale of policy work in such a short period of time, we can ensure that we don’t just write a strategy and that’s it. It needs to be a living document, set up with five-year checkpoints. We are creating a roadmap to 2050, which will set out those priority actions that need to be taken forward in the next five to 10 years, however, it doesn’t stop here, it will keep being evaluated and updated.”

Northern Ireland’s success in decarbonisation to date has largely occurred in relation to power. Recent statistics show that 47 per cent of electricity consumption is coming from renewables, the vast majority of which is from onshore wind. Some concerns have been raised that future decarbonisation in relation to power will be much more difficult than progress already made and has been suggested that the areas of heat and transport could provide bigger wins. However, Byrne is of the opinion that progress to date puts the power sector “in a good place to drive the future of decarbonisation as well”.

“That can probably happen at a quicker pace than other sectors, where more heavy lifting will be needed in the early stages,” he explains. “Fifteen years ago, we had 3 per cent of our electricity consumption from renewables and it’s remarkable that we’ve moved to 47 per cent in such a short space of time.

“The state of the technologies and the costs associated with them are different now. We’ve seen the cost of renewable technologies come down to where they are competitive with fossil fuels and we’ve seen renewables in the market be able to set effectively zero prices.

“It’s a really strong place for the future decarbonisation and the challenge for us is to get the policy environment right to make sure that happens.”

Recognisably, a driving force behind the increase in renewable generation from onshore wind was the Northern Ireland Renewables Obligation (NIRO), the main support scheme for encouraging increased renewable electricity generation, which closed in 2017.

Asked whether similar schemes will be the basis for ensuring the uptake of new renewable technologies, Byrne says: “One of the five workstreams identified is on routes to market but it’s not just about a support scheme. It’s the entire policy environment that we put in place, whether that’s around the grid or planning etcetera. The first step that is needed is the policy ambition, so, certainly support schemes will be something looked at through the working group but it won’t be the only thing because there is an awful lot more to it.”

Another barrier to decarbonisation is the cost associated with rolling out new technologies and suitable infrastructure to move away from the use of fossil fuels. Given the likelihood of restricted budgets following the economic impact of the pandemic, ensuring that the Energy Strategy is prudent to the economic climate is crucial.

Byrne agrees that the strategy needs to have a focus on costs but makes the point that increasing levels of renewables shouldn’t be always regarded as the most expensive option.

“Staying with power as an example, the investments that we have made in renewables have lowered the costs of established technologies to where they are now as competitive, if not cheaper than fossil fuels. It isn’t necessarily true that in every area bringing forward renewables or taking different approaches will be more costly,” he says.

“However, a number of areas are going to require major investment but I think climate change is recognised as a priority across the Executive.

“The Energy Strategy needs to take a close look at costs and we’re not looking at policies just in terms of their ambition and what they can deliver but also the potential implications for consumers and for taxpayers. That’s why the focus remains on evidence and ensuring that the options are effective.”

The Energy Strategy Director is aware that investments will not take a ‘one size fits all’ approach and will require a variety of solutions.

“There won’t be one answer. For example, when we look at heat, the right solution for decarbonisation will be different depending on a range of factors such as grid access and building type. It’s about ensuring we get the right policy options for different scenarios and that these are cost effective.”

Byrne emphasises that the long-term nature of the strategy will require constant monitoring and foresight beyond the established technologies such as onshore wind and solar.

“We need to be looking to the future at those new potential sources that are emerging. Things like hydrogen, biomethane and various technologies are entering the mix. Those technologies are maybe not ‘market ready’ currently but could be in the position of offshore wind 10 to 15 years ago and will in the future drive decarbonisation in a cost-effective way. So, it’s not about picking winners but putting in place a policy environment to bring forward a range of technologies that are right, depending on what the problem is that we need to solve,” he adds.

“A good example is the modern gas infrastructure which is currently being extended across Northern Ireland. One of the key themes of the working group looking at heat is looking at what goes into that gas infrastructure and how the network would be developed to use renewables. But, that wouldn’t be the only solution as not everyone has gas and that wouldn’t decarbonise heat for us. What we are looking at are complimentary approaches to tackle heat decarbonisation.”

Byrne is quick to stress that the focus of policy options will extend beyond the three main energy sectors of heat, transport and power, highlighting that the EU’s Clean Energy Package’s ambition to see the citizen put at the heart of the future of energy will be crucial to an effective energy transition.

“People and how they interact with the energy system, how they themselves can participate and how they can be protected is a critical factor in the transition,” he sates. “It will not be delivered by energy companies making decision for consumers and we recognise that consumers need to be informed and empowered.

“Our dedicated theme on consumers has facilitated good engagement thus far and we will be taking forward a work programme to engage further with consumers and to test some of our policy issues and install confidence.

“This isn’t just about the technologies but about behaviours and how you change those. That’s going to be a key element of the Energy Strategy.” 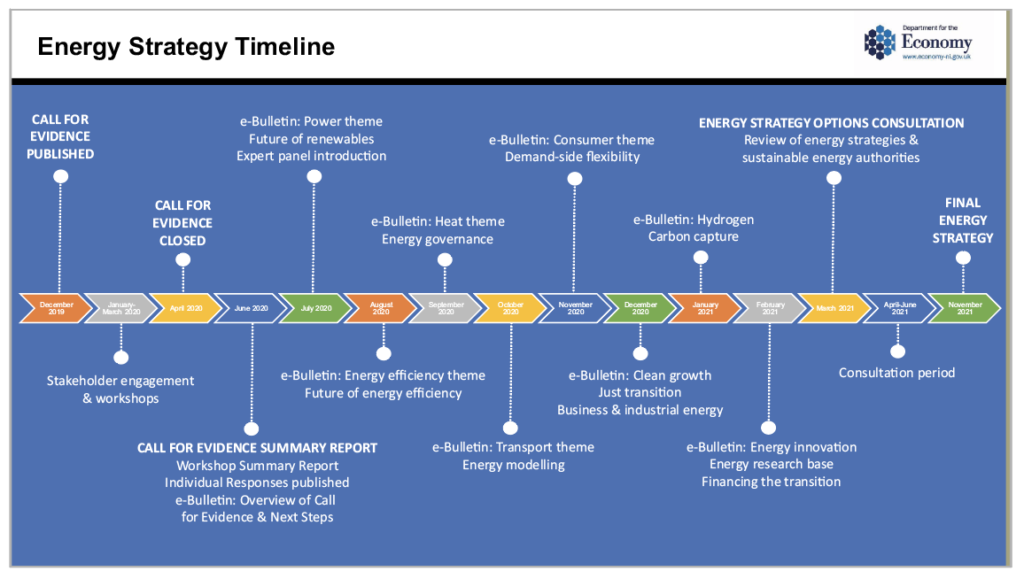