This is the province’s first primary legislation on energy since the The Electricity (Single Wholesale Market) (Northern Ireland) Order 2007, which prepared the way for the Single Electricity Market.

The Bill followed calls by the Utility Regulator and energy companies to update the law on gas and electricity regulation. Its main aims are as follows:

• A special administration regime for the electricity sector;

• Providing for deemed contracts between gas companies and customers;

• Extending existing powers of entry into premises for gas companies.

Consultation on the proposed amendments took place between July and September 2009. The ‘do nothing’ option was ruled out as gas legislation was out of line with both the comparable law in Great Britain and also local electricity legislation.

A special administration regime is designed to ensure the uninterrupted operation of essential gas and electricity networks when the network company becomes insolvent or is under threat of insolvency. This is especially important in economically uncertain times, where companies are more at risk.

Normally, a receiver or administrator seeks to obtain the best possible price for company assets on behalf of creditors and shareholders. However, this approach could result in an energy network ceasing to operate, leaving its customers without a supply.

Rules for energy administration are outlined in detail. An application for an order could only be made by DETI or the Utility Regulator, with DETI’s consent. Company rescue is the preferred option for ending such an administration.

The rest of the Bill aims to bring the gas sector into line with the electricity sector, and therefore close some loopholes which have developed.

The Utility Regulator would draw up guaranteed performance standards for gas suppliers and conveyers, to be approved by DETI. These are normally percentage targets and, in the case of gas, could cover the provision of supply and the promotion of efficient gas use. Compensation could be paid to consumers if these standards are not met.

Different standards may be determined for different suppliers, if the regulator thinks this will not cause undue disadvantage in competition. 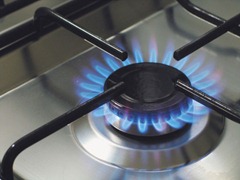 Customers often receive a gas supply without first agreeing contractual terms with the supplier e.g. when a new tenant moves into a house. The supply contract will be deemed to have arisen in these circumstances.

As terms and conditions have not been expressly agreed in these situations, regulations for these would be drawn up by the Utility Regulator. Deemed contracts are not intended to legitimise any unlawful activity used to gain a gas supply e.g. tampering with equipment.

Gas companies can currently enter premises where there is a danger to life or property e.g. a gas leak. However, electricity companies have stronger powers which allow them to take meter readings or investigate tampering with a meter. The Bill would therefore allow gas companies to enter premises to:

• disconnect a supply or remove equipment where the supply is no longer required; and

Intentionally or negligently damaging equipment used for conveying, storing or supplying gas would become an offence. This already applies to electricity plant. The maximum penalty is a £1,000 fine and the gas company would be permitted to disconnect premises or remove meters if this offence occurs.

The Bill was presented to the Assembly on 1 June and passed its second stage on 15 June without going to a vote.

Leslie Cree, for the UUP, supported the “uniform approach” to gas and electricity. SDLP MLA Conall McDevitt questioned the meaning of “reasonable times” for entering premises. He welcomed the potential for government intervention to rescue companies but warned that this could become a “significant liability”. McDevitt thought the Bill was “loftily titled” when it dealt with a small but important area.

DUP MLA Simon Hamilton put out a stern warning about the dangers of tampering: “Not only is it stealing from your gas supplier but it is also potentially endangering your neighbours and families.” Suspicious customers had mysteriously been unable to be contacted.

Responding, the Minister said this was an example of the House at its best. She indicated that the UK National Measurement Office may test damaged meters, to ensure independence. Foster also looked forward to gas storage being established near Larne.

The Bill is now with the Enterprise, Trade and Investment Committee. Paul Butler spoke for the committee in the debate, and separated his comments from his Sinn Féin statement.

While supporting the principles of the Bill, the committee wants assurances that powers of entry will be used appropriately and sensitively. In particular, it wants the “reasonable cause” for entry to be clearly defined. The committee is also keen that giving a grant to a failing energy company would be “very much a measure of last resort.”

Natural gas is an “essential service” for households and businesses depending on it, and customer standards must reflect this. The Consumer Council had also suggested to committee members that compensation payments should come from company profits.

The committee stage was due to finish on 28 September, as agendaNi went to press.

DETI officials do not expect any extra public spending as a result of the Bill. However, they may have to provide a loan, grant, indemnity or guarantee to rescue a ‘special administration’ company. The Department of Finance and Personnel would need to give its permission. DETI would also have the power to recover those costs e.g. through higher charges to other energy companies.