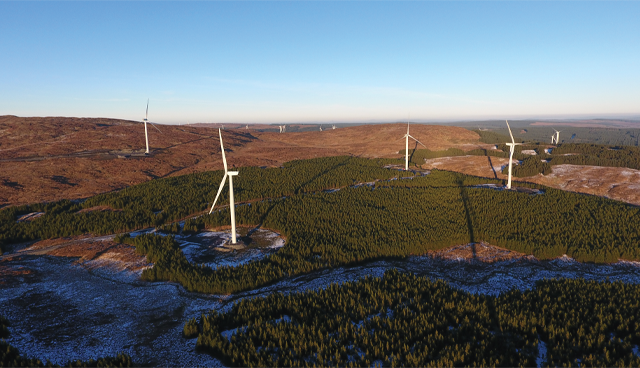 2021 is a defining year for climate action on the island of Ireland and a range of important measures are required to deliver on 2030 commitments, writes Peter Baillie, Managing Director of Energia Renewables.

In 2030, at least 70 per cent of all electricity consumed on the island of Ireland will be from renewable sources. Achieving this ambitious target enables the decarbonisation of the wider economy, through electrification. Various high-level roadmaps and plans have shown how this can be done and attention must now turn to making it a reality.

The scale of this challenge cannot be underestimated. In 2010 renewable electricity made up less than 15 per cent of electricity consumption on the island. Since then targets have been very effective in reaching the 40 per cent target by 2020. This decade we must add at least another 30 per cent.

In Northern Ireland the development of a new Energy Strategy in 2021 is crucial to support the further decarbonisation of the economy. A new support scheme for renewable electricity projects is urgently required to build on the significant success already achieved.

In the Irish Government’s All of Government Climate Action Plan, National Energy and Climate Plan, and Programme for Government, a clear vision has been set for a decarbonised future. As was the case for the 2020 targets, Minister Eamon Ryan TD is once again in the position to put in place a successful framework for the delivery of these ambitious targets.

To support the achievement of these plans, Energia will commit €3 billion to renewable energy projects over the next five years through our Positive Energy Programme. Investments will include onshore and offshore wind, solar, battery storage, anaerobic digestion and green hydrogen. As a leading energy provider and infrastructure investor, across renewables, flexible generation and customer solutions, Energia already delivers 21 per cent of Ireland’s wind power. We’re an integrated energy supplier to over 770,000 homes and businesses across the island of Ireland, and we are Ireland’s greenest supplier.

The Climate Action Plan identifies the need for very significant investment in new renewable capacity in Ireland; at least 3.5GW offshore wind, up to 1.5GW solar and effectively a doubling of onshore wind to 8.2GW. The Programme for Government increases the offshore wind ambition to 5GW. However, to achieve this level of ambition, there are a number of issues which require urgent attention in 2021.

It is essential that the power system facilitates the ambition of the policy and to this end an urgent review of grid development should be undertaken by EirGrid and SONI in 2021, to ensure a grid development plan that can match the renewable ambition put forward by Government.

Renewable Corporate Power Purchase Agreements (ReCPPAs) are to account for 15 per cent of Ireland’s overall target of 70 per cent renewable electricity in 2030. Current policy and regulatory arrangements do not facilitate the growth of this market and significant progress is required year-on-year if this target is to be achieved. In 2021, a clear framework for the development of the ReCPPA market must be brought forward.

Possibly the most ambitious aspect of the renewable electricity ambition on the island is the development of up to 5GWs of offshore wind in Ireland. This is a nascent sector with projects of an unprecedented scale in terms of both cost and complexity. With a development timeline of approximately 10-years for a typical project, the projects that will contribute to 2030’s targets are already in existence and all are at a relatively early stage in their development.

Energia is making progress preparing planning applications for its two Irish offshore projects up to a combined scale of 1.8GW, in the North Celtic Sea off the coast of Waterford and the South Irish Sea, off the coast of Wexford. These projects are on track to contribute to Ireland’s 2030 targets but need policy decisions urgently to maintain this progress.

There are multiple important milestones in development of an offshore wind project, any of which can be fatal to a project’s prospects of delivery. These include the initial foreshore licence and marine feasibility studies, public consultation, environmental impact assessments, grid connection approvals, an extensive planning applications process and successful participation in a competitive Renewable Electricity Support Scheme (RESS) auction, before any construction begins.

The introduction of the Marine Planning and Development Management (MPDM) legislation in early 2021 is imperative to allow offshore wind projects to enter the planning process. For projects that must apply for a planning interest, a decision to grant must also be made in 2021, if these projects are to remain on-track for delivery by 2030.

To facilitate the delivery of this ambitious offshore wind target, the Department of the Environment, Climate and Communications (DECC) has recently classified Phase 1 and Phase 2 Projects. Recognising that Phase 1 projects (previously the Relevant Projects and Arklow Bank) will not achieve the stated target of at least 3.5GW, a category of Phase 2 projects has been identified. These are projects (previously Enduring Projects) on the east and south coasts that are capable of contributing to the 2030 target.

The inclusion of the south coast for Phase 2 projects is an important development that is not only consistent with the Programme for Government, it acts as a mitigant against significant cumulative impact concerns arising from concentrated development on the east coast that could materially delay or prevent a number of these projects from contributing to the 2030 target.

If Phase 2 projects are not to be included in the Transitional Protocol applicable to the Relevant Projects, it is imperative that the focus of policy in 2021 is on facilitating the development of Phase 2 projects in parallel with those in Phase 1. This will require expedited mechanisms through which these projects can progress planning, consenting and grid applications.

Realising the 2030 vision requires urgent action in 2021. The decisions taken this year will define our ambition and provide clarity on how it is to be achieved. Ultimately, 2030 is the first step to 2050 and net-zero economies, and therefore represents a no-regrets policy that benefits future generations.