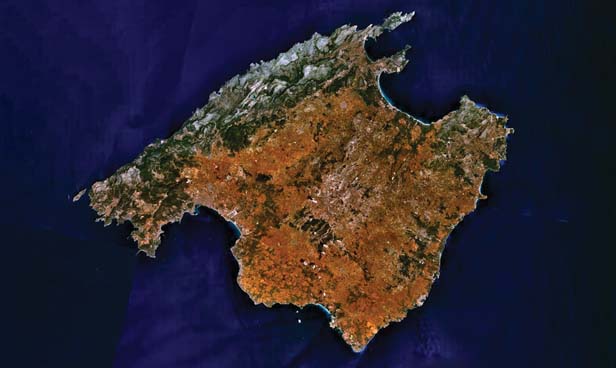 Jaén is the general coordinator of the project Green Hsyland and she works in the Innovation and Renewable Gases Department at Enagás.

Enagás is the main gas TSO in Spain and the technical manager of the Spanish gas system, with a presence in eight countries across the world.

As part of its commitment to energy transition and decarbonisation, three years ago Enagás created the Innovation and Renewable Gases Division. In particular, the organisation recognised the potential of biomethane and green hydrogen, produced from renewable sources and usable across multiple applications.

“Making use of existing gas infrastructure is paramount for an affordable transition,” says Jaén.

As a focus of this commitment, Enagás founded Enagás Renovable in 2019, which will promote development projects associated with green hydrogen and biomethane. The company is leading the Western Route of the Hydrogen IPCEI Green Crane initiative, a programme to create south-to-north green hydrogen routes across Europe.

In the context of the IPCEI initiative, Enagás Renovable is developing more than 30 hydrogen projects, the majority of which are in Spain.

Among these projects is the Hub Baleares: Power to Green Hydrogen Mallorca initiative, which will see the production of green hydrogen for multiple applications, including injection into the natural gas grid.

“The Green Hysland project is the production of green hydrogen from photovoltaic solar energy, for various applications and injection into the gas network,” states Jaén.

Outlining its origins, Jaén explains that the project began with the announcement that a major industry player on the island of Mallorca was to close its cement plant. This initiative is part of an agreement between the Ministry of Industry, Trade and Tourism and the Balearic Government with Enagás, Acciona, CEMEX and Redexis to reindustrialise Lloseta (Mallorca).

The project includes the development of a green hydrogen production plant from renewable photovoltaic energy. The green hydrogen generated will have multiple applications on the island, including the fuel supply to a fleet of fuel cell buses and fuel cell vehicles, the generation of heat and power for commercial and public buildings, the supply of auxiliary power for ferries and port operations and the creation of a hydrogen refuelling station (HRS).

The project also includes green hydrogen injection into the island’s gas pipeline network, through a Guarantee of Origin System, to decarbonise the gas supply.

In May 2019, the Balearic Government approved the declaration of the Power to Green Hydrogen Mallorca project as a strategic industrial project.

Outlining why Mallorca is a prime location for the project, Jaén highlights three main reasons:

A concept of the project points to the multiple application of green hydrogen from PV parks in Lloseta and Petra including a hydrogen refuelling station at the EMT bus depot in Palma; a commercial fuel cell-based CHP system in a hotel in Palma; a fuel cell and hydrogen (FCH) primary power system for a ferry terminal in the port of Parma; injection of hydrogen into the local gas distribution grid in Cas Tresorer; and a fuel cell-based CHP system within a municipal building in Lloseta. 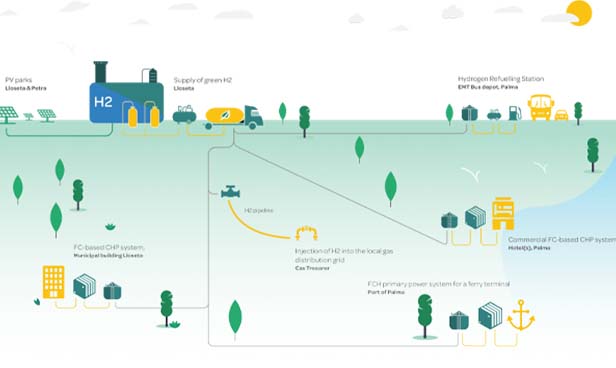 Jaén explains that the project began in 2021 and is funded for completion in 2025 with an estimated total investment of €50 million.

From the outset the Lloseta Green Hydrogen plant will generate 330 tonnes of hydrogen per year, but Jaén explains the ambition is to see this scaled up to 1,000 tonnes per year and to extend the eco-system into further uses throughout the island.

Jaén outlines a number of benefits associated to the project, including:

On the topic of replicability, Jaén explains that the development of replication experiences and business models are foreseen in five other EU islands, including Oileáin Árann and Valentia in Ireland, Madeira in Portugal, Tenerife in Spain, Ameland in Netherlands and Greek Islands, as well as on the island of Chiloé in Chile and in Morocco. The Green Hysland demonstrations will also provide Europe with a blueprint for decarbonisation of island economies, and an operational example of the contribution of hydrogen towards the energy transition and the 2050 net zero targets.

“This project will deliver a roadmap towards 2050 that compiles a long-term vision for the development of a widespread hydrogen economy in Mallorca and the Balearic region, in line with the environmental objectives set for 2050,” she says.

Jaén also highlighted: “Hydrogen will help to increase the penetration of renewable energy in the Balearic energy system, demonstrating sector coupling and sectorial integration, and moving towards full decarbonisation of the economy”.