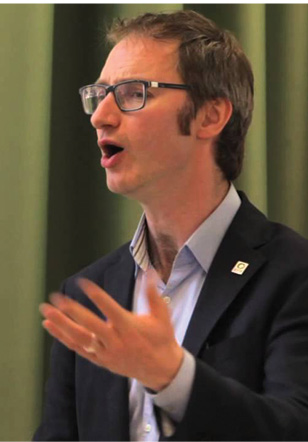 Director of Friends of the Earth Ireland, Oisín Coghlan examines the UN Climate Conference in Marrakech and assesses the potential repercussions for Ireland.

The recent UN Climate Conference in Marrakech focused on the implementation of the landmark climate deal agreed by 195 countries in Paris in December 2015. In a remarkable diplomatic surge, enough countries ratified the treaty for it to come into force on 4 November just before the Marrakech meeting got underway. Minister for Climate Action, Denis Naughten, hand-delivered Ireland’s ratification instrument to the UN in New York to ensure Ireland was onboard from the offset.
Actions, however, are currently falling far short of commitments. A report on the emissions gap by the UN Environment Programme forecasts warming of 3°C even if current pledges are all implemented. Unfortunately, Ireland is a laggard not a leader. The latest figures on Ireland’s emissions show they are still 6.6 per cent above 1990 levels, and rose 3.7 per cent in 2015. Ireland is one of only two countries in the EU which is going to miss its 2020 targets.
The Climate Action Act now requires the Government to adopt a five-year action plan, known as the National Mitigation Plan, by June 2017. Despite getting a very soft deal from the EU on our 2030 targets, our current pathway would expose us to non-compliance costs of up to €6 billion.
The Plan should not just focus upon our EU targets for 2020 and 2030, but “should outline the roadmap to achieve the 2050 national objective”. The Government has now launched a consultation on the specific measures to be included in the plan. The following are five key tests for the plan Ireland ultimately adopts.

1. Does the plan add up?
The mitigation plan needs to be consistent with our national 2050 objective of an 80 per cent cut in net emissions. That means the measures included need to deliver year-on-year cuts of at least 4 per cent starting in 2017. Like the 2007 climate strategy, it should have an overall carbon budget for its five-year timeframe and allocate the available emissions and reduction effort between sectors.

2. Does it start the phase out of fossil fuels?
The Climate Council identifies ending peat-firing of power stations as an obvious step. They provide just 9 per cent of our electricity but produce 27 per cent of out electricity emissions. Trócaire has called for the divestment of the Ireland Strategic Investment Fund’s €133 million holdings in fossil fuel companies as a symbolic step.

3. Does it ramp up renewables and community ownership?
The Energy White Paper identifies the “energy citizen” as a key driver of the transition. Now it’s time to enable that community participation to happen. Key steps include a fair price for solar electricity (backed by over 60 TDs and Senators), steps to enable community-led projects such as simplifying grid access, and a Danish-style shared ownership scheme mandating that developer led projects offer 20 per cent of the equity to local people.

4. Does it put agriculture on a path to carbon neutrality?
The national objective is that total annual emissions from agriculture in 2050 will be no more than what is absorbed annually by our carbon sinks (forests, peatlands, grasslands). The Mitigation Plan needs to lay out what a sustainable level of carbon sinks is (possibly 5mt a year) and chart a path there for agricultural emissions from their current 20mt a year.

5. Does it realign transport spending to reduce emissions?
Transport is the only sector to have increased its share of emissions since 1990, in fact its doubled since 1990. And transport emissions rose 4 per cent in 2015. The plan needs to prioritize investment in cycling and walking and clean public transport. The plan also needs to commit the new national spatial strategy to facilitating low-carbon mobility.
Nobody is asking Ireland to do more than its fair share. The Mitigation Plan will show whether the Government is serious about rising to the challenges and grasping the opportunities of a fossil free future.