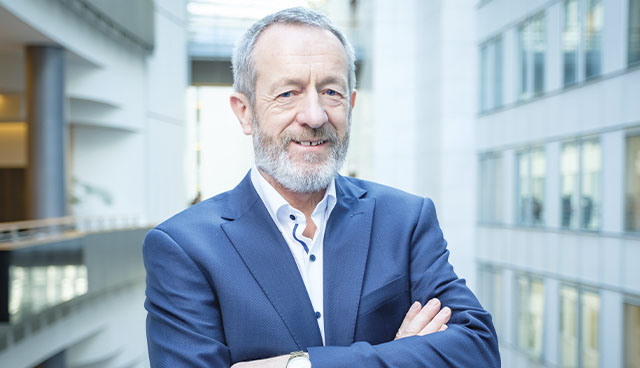 Fine Gael MEP for Ireland South, Seán Kelly, speaks to eolas about his proposals under the EU’s Fit for 55 initiative to remove obstacles to planning and permitting in order to accelerate the development of public renewable energy projects.

“We cannot achieve our Green Deal targets without a massive expansion of renewable energy,” Kelly says. “We have the capability to thrive in climate neutral Europe, but this will take a widespread uptake from all stakeholders, backed by government and society more broadly.”

As Kelly emphasises, wind and solar power are both intermittent, meaning that Ireland must plan to replace its fossil fuel-based backup system with battery storage and demand response as well as utilising the energy storage of molecules such as hydrogen that are produced with renewable energy. However, “we also cannot hide from the fact” that there will still be “a role to play for transitional fuels until then”. The speed with which that transition can be conducted is currently constrained, Kelly argues, and the Kerry native states that this must be addressed.

“The core goal is to decarbonise the economy and energy system; we do not have time for this process to be tainted by ideology,” he says, insisting: “The reality is that if we are able to be successful in this transition, we must fast-track the removal of planning or market-based obstacles to ensure rapid delivery of renewable energy technologies. Permitting and licensing procedures remain one of the biggest hurdles in achieving mass deployment of renewable technologies. Procedures for granting permits differ in member states, and with more cross-border cooperation on energy projects, we are likely to see more and more unnecessary time wasted on getting the required bureaucracy in order.”

“There is a serious need for Ireland to change its regulatory and planning system. Although action is being taken, we are not moving quickly enough to develop offshore wind projects needed to meet targets in the Government’s Climate Action Plan.”

While Kelly speaks in general terms about Europe, he emphasises the need for reform in Ireland, where his own party is currently in government with both Fianna Fáil and the Green Party: “There is a serious need for Ireland to change its regulatory and planning system. Although action is being taken, we are not moving quickly enough to develop offshore wind projects needed to meet targets in the Government’s Climate Action Plan. This leads to a lack of confidence in industry and the supply chain, and it must be urgently addressed.

“Beyond the regulatory framework, more resources need to be allocated to planning authorities so they can speed up applications for positive energy projects. This situation is not unique to Ireland and to put it bluntly, if we collectively do not address permitting and planning, then we are doomed to fail the next generation.”

In July 2021, the European Commission unveiled its Fit for 55 legislation package, aimed at supporting the delivery of a 55 per cent reduction in greenhouse gas emissions by 2030. The package contains legislative proposals to align climate, energy, and transport policies across the European Union. These include: the application of emissions trading to new sectors and a tightening of the existing EU Emissions Trading System; the increased use of renewable energy and greater energy efficiency; a faster rollout of low emission transport modes and the infrastructure and fuels to support them; an alignment of taxation policies with the European Green Deal objectives; and measures to prevent carbon leakage and tools to preserve and grow our natural carbon sinks.

Under these principles, Kelly is proposing the introduction of a new label on public interest renewable projects “that will allow the granting of priority status in national law”. “This new project status should ensure a prioritisation by the competent authority and the streamlining of processes and procedures,” he says.

“The label would effectively guarantee that necessary, positive renewable energy projects will receive far quicker licensing and planning authorisation. Each member state should carry out strategic plans detailing how they will adapt their permit system to ensure that they will reach their commitments under the energy and climate plans. This, I believe, should be done via the Renewable Energy Directive Article 15 and 16. I am currently in discussion concerning this within the European People’s Party group, and I have been encouraged by their reaction to my proposals.”

Kelly makes a macro-observation before delivering his conclusion, reflecting on how the Earth has seen these energy transitions before, from the use of coal emerging during the Industrial Revolution and crude oil following the first World War, and must act now to address the great challenge of this generation. “Instead of an evolution of energy sources that are more efficient in terms of energy output, we now have to redesign our fuel and electricity systems so that we can maintain societal and economic order while staying within our planetary boundaries,” he says.

“Combined with the short time we have to make this fundamental switch; this energy transition is certainly unique, and the task cannot be overstated. It is clear that addressing climate change will be pivotal to the future growth of our economies as the cost of inaction now will be far exceeded by the cost involved with adaptation, never mind the societal and political instability this would create.”

Concluding, he calls on the European Commission to oversee this process and ensure member states are fulfilling their duties to make Europe fit for 55: “Member states should report to the Commission based on key performance indicators [KPIs], including whether or not planning authorities are adequately resourced. The Commission should publish these indicators together with an assessment and recommendations, ranking the different approaches taken, and take every effort to encourage member states to achieve higher scores in terms of KPIs.

“We have the technology, the expertise and the capacity; there are many technical problems to face but we really do not have any excuse to have a permitting and licensing system that slows needed progress.”