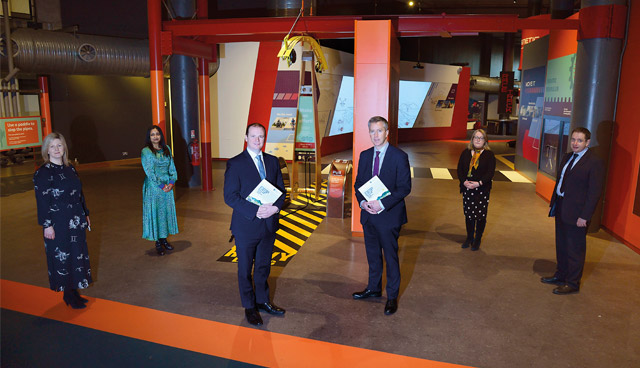 A support scheme to encourage the generation of renewable electricity in Northern Ireland could be in place by 2023, according to the first annual action plan published under the Department for the Economy’s (DfE) new long-term energy strategy.

However, the Department has tempered expectations by the use of language which fails to fully commit to establishing a scheme by next year, instead saying it will “consult on a renewable electricity support scheme in 2022 for delivery in 2023”.

The commitment is one of 22 objectives set out in the first annual action plan published by the Department following on from publication of the long-awaited Energy Strategy in December 2021.

Northern Ireland’s success in reaching penetration levels of 47 per cent (40 per cent target) of electricity consumption coming from renewables is due largely to onshore wind generation.

Recognisably, a driving force behind the increase in renewable generation from onshore wind was the Northern Ireland Renewables Obligation (NIRO), the main support scheme for encouraging increased renewable electricity generation, which closed in 2017 to new generation.

Since then, there have been calls for a fresh support scheme tailored for Northern Ireland, however, a number of factors including existing high levels of curtailment and Northern Ireland’s handling of the Renewable Heat Incentive, have contributed to a delay.

What form the RESS scheme will take remains to be seen. Both Great Britain, through Contracts for Difference (CfD) for generation above 5MW, and the Republic of Ireland, through a Renewable Electricity Support Scheme (RESS), have implemented incentives to encourage investment in low carbon generation and Northern Ireland will require a similar mechanism to attract the investment necessary to deliver on a 70 per cent renewable electricity target.

The Department for the Economy has stated that it is working with the UK’s Department for Business, Energy and Industrial Strategy (BEIS), to explore the possibility of extending the Contracts for Difference scheme to Northern Ireland, with the aim of tailoring the scheme to protect consumers from being exposed to wider costs across the UK.

“We are currently working with BEIS to explore whether we can extend the Contracts for Difference scheme currently operating in Great Britain to Northern Ireland, with a view to inclusion for the next Allocation Round in 2023. If not, we will seek to put in place an alternative support mechanism for investors,” the Department states.

The scale of energy decarbonisation challenge faced in Northern Ireland can be viewed in the context that even when surpassing 2020 targets for renewable energy, in over 30 years since 1990, Northern Ireland has only reduced energy-related emissions by 25 per cent. Fresh targets within the strategy mean that energy-related emissions will need to be reduced by 56 per cent by 2030, less than eight years away.

The two major targets set out in Northern Ireland’s new energy strategy are in relation to: energy efficiency, aiming to deliver energy savings of 25 per cent from buildings and industry by 2030; and renewables, meeting at least 70 per cent of electricity consumption from a diverse mix of renewable sources by 2030. An additional target outlined by the Department is an aim to double the size of Northern Ireland’s low carbon and renewable energy economy to a turnover of more than £2 billion by 2030.

The Department of the Economy puts the average annual baseline energy spending on the current energy system at an estimate of a substantial £8.7 billion. However, it factors in advice from the Climate Change Commission that by 2050, 94 per cent of the total investment in clean energy will be recouped and points to a net annual cost of meeting net zero energy emissions between 2021 to 2050 of £62 million, when operational savings are included.

The Energy Strategy is centred around delivering on five key principles:

However, while the strategy addresses the areas in which investment will be required to drive technology rollout and energy decarbonisation, there is a notable absence of a strategic investment plan across the various sectors of energy, heat, and transport. Published slightly later than expected, the Energy Strategy’s associated action plan, rather than scoping out long-term broad ambitions and investments, took the form of an annual outlook, with its successor planned for 2023. Such an approach means that gauging the scale and financial commitments to some of the Strategy’s long-term ambitions is difficult.

As expected, the plan’s 22 actions are contained within the five principles outlined in the Energy Strategy. For many, the absence of ring-fenced resources to tackle some of the most challenging areas of energy decarbonisation will be seen as a missed opportunity to emphasise the Executive’s commitment to investors and industry. Another critique which could be levelled is in relation to commitment centred around the restrained language used within the action plan. For example, while most stakeholders are in agreement for a centralised information hub, empowering consumers to buy in and play an active role in the energy transition, rather than commit to the establishment of such a hub within a timescale, the plan says it will “produce a detailed plan with timescales for establishment of a one stop shop for energy information, advice and support scheme delivery”.

Some welcome commitments that do exist in the action plan include the establishment of a cross-departmental steering group on fuel poverty reduction, a call for evidence on protection for consumers during energy decarbonisation and deliver £10 million of funding through a new Green Innovation Challenge Fund, to support green technology innovation.

The Department says that plans to carry out an energy skills audit for energy decarbonisation but provides no detail on how it will seek to address the obvious gaps and skills that will be identified.

Finally in relation to the green economy, the Department says that it will develop a business case to deliver a Hydrogen Centre of Excellence to be located at the Advanced Manufacturing Innovation Centre (AMIC).

Some firm commitments within the action plan for 2022 include:

Alongside the commitment to consult on a renewable electricity support scheme this year, for delivery in 2023, the action plan also states that the Department for Infrastructure will review legislation to ensure that permitted development for heat pumps aligns with modern standards and requirements and to assess any changes for rolling out other low carbon heat technologies.

The action plan also commits to develop an action plan to deliver 1GW of offshore wind from 2030. Northern Ireland currently has no operational offshore wind and previous attempts to develop have all been hindered. The Crown Estate owns the UK seabed, and any development would require an agreement with the Crown Estate for leasing, the implementation of regulatory approvals and the development of a competition process.

“Our focus will be facilitating pre-commercial test and demonstration sites in the 2020s which will put us on a clear pathway to commercialisation by the early 2030s or sooner, if possible,” the Energy Strategy states.

Additional actions outlined in the plans range from a geothermal project and studying the future role of biomethane, to low carbon heat technologies for homes and businesses.

Discussing the publication of the action plan, Economy Minister Gordon Lyons MLA welcomed an energy-efficiency-first approach “which will help consumers reduce the energy they use and therefore minimise their energy bills”.

“The action plan maps out the best route to ensuring people will live and work in more energy efficient buildings, whilst helping some of the most vulnerable in society to live in warmer homes, reduce ill-health and ultimately save lives. We understand people need information, advice and financial support to make some of these changes, particularly with affordability in mind, and we will ensure that the appropriate help is available.”