The future of electricity

Strategic thinking in government is key to speeding up a low carbon future, according to International Energy Agency analyst Tom Kerr.

“Real, concrete evidence on the ground” shows that a transition to a low-carbon global energy market has begun but governments also need to set down strong strategic frameworks to reach that goal.

That was Tom Kerr’s main message as he addressed this year’s Energy Ireland conference on how to accelerate a global energy technology “revolution”. Kerr is a senior analyst at the International Energy Agency (IEA).

Emissions needed to peak by 2020, if not sooner, but a carbon pricing strategy would not achieve this on its own.

Crucially, government policy was needed to bring down the costs of solutions so they could play a greater role. At present, only energy efficiency, nuclear and hydro fall within the same price range as carbon pricing. Carbon capture and storage, biomass and most renewables proved more expensive, topped by marine.

The “growing giants”, he noted, were very concentrated and strategic in their domestic energy policy, as shown by China’s $8,000 electric vehicle subsidy. To assist governments, the IEA has started to produce technology roadmaps to consider the way forward to achieve 2050 energy targets.

These consider which countries are leaders, what policies are working and how technologies currently perform e.g. on installation costs and efficiency. Time-framed actions are also set out, worked back from 2050.

“Almost every technology needs a dramatic injection of R&D,” he stated, calling for government R&D budgets to increase by three to six times to meet IEA-identified needs.

The IEA wants to see an extra $2.2 trillion invested in low carbon over the next 10 years. Its goals for 2030 include reducing global energy demand by 14 per cent, compared to the business-as-usual scenario, and halving the CO2 intensity of global electricity.

Energy R&D has dropped from a peak in the late 1970s and has gradually picked up again since 2000. Major economies allocated at least $520 million towards low-carbon energy technologies in their 2008-2009 financial stimulus packages but, according to Bloomberg New Energy Finance, just 21 per cent of this had reached the sector by May 2010. This is partly because governments have found it difficult to distribute such large sums. 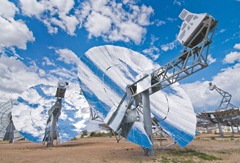 There was also a “very strong need” for the private sector to take more risks. Mapping salt caverns for long-term CO2 storage is time-consuming and expensive for governments. However, energy companies could lend their expertise, equipment and staff in return for preferential treatment when licences are issued.

At a global level, the IEA says all technologies are needed but each country needs to work out its own specialism. Clean coal, for example, is suitable for India but not Ireland.

“Countries should focus on their strengths based on resources, based on their markets, based on the constructions they’ve have, their population density, their state of development,” he told agendaNi.

More international collaboration and information-sharing will create efficiencies and lower the cost of technologies. Governments must have predictable policies within their strategic framework, but also flexible enough to remove the subsidy when the technology becomes commercially viable.

Members of the public also have a major role to play (e.g. using smart meters) and must realise that they cannot refuse all technologies: “They need to become more informed and engaged and that’s a big challenge. The social scientists need to be brought in too.”

He does not sense an over-reliance on wind, but says decisions to pursue that route must be properly informed. The global share of wind could be pushed to 15-20 per cent, without causing instability in the grid.

Kerr’s key message for Northern Ireland is that it should think about what its strategic approach should be: “Should they just rely on large central generation or should they start to think about home-grown industry?” The IEA, for its part, was ready to advise both national and regional governments, including the Executive.

• CCS for Power Generation and Industry