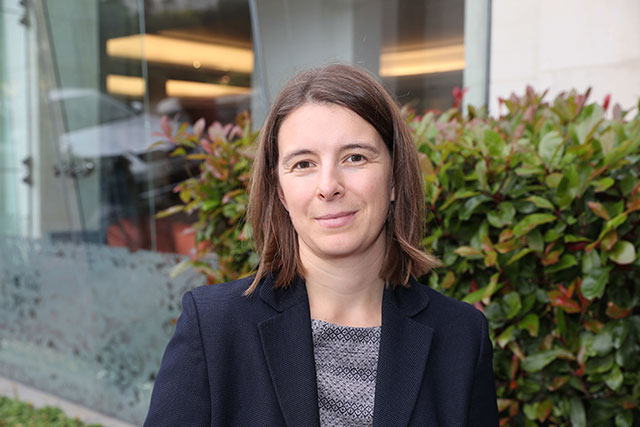 Katherine White has over a decade of experience working within energy and climate change policy analysis. Currently she has responsibility for developing Scotland’s overarching energy strategy.

White opens her presentation at this year’s Northern Ireland Energy Forum 2016: “We have an ambitious framework on energy and climate change, all driven by the Government’s objective of sustainable, inclusive economic growth. So the First Minister of Scotland is very keen that we try and achieve inclusive economic growth that is sustainable. The sustainability has come through via a renewed commitment to climate change ambition. We already have a Scottish Climate Change Act which commits us to 42 per cent reduction by 2020 and 80 per cent reduction by 2050. The new manifesto this year committed to a new Climate Change Act with potential for higher ambition in the long term, reflecting the Paris Agreement.”

Currently, White’s unit is developing a strategy for new and higher emissions reduction targets, energy targets in terms of grid intensity and the decarbonisation of the heat and transport sectors. They also have a range of renewable energy targets, including a 100 per cent renewable electricity target for domestic consumption.

The Scottish forecast is one of substantial success, especially around community and locally-owned energy targets. Indeed, with regards to the latest statistics on emissions reduction Scotland has met its 2020 target ahead of schedule with a nearly 46 per cent reduction on 1990 levels in 2014.

Electricity has been a fairly dramatic and changing picture in Scotland in the last 10 years. In relation to the electricity mix for Scotland, renewable capacity has risen significantly while the latest figures indicate that coal has almost dropped off.
White outlines: “Our two biggest coal plants have come offline in the last few years, producing a dramatic drop in our coal generation. Significantly this year, renewables generated more electricity than any other single source in Scotland for the first time, ahead of nuclear and the other thermal supplies. Scotland is a strong net exporter of electricity, but I suppose the question is, may that change in the future given the changes in our capacity?”

The Scottish Government is increasingly concerned about security of supply as a whole. Scotland has particular issues regarding black start. White notes: “There is no expectation for new investment to come on stream, so we are slightly concerned about the market for new generation and how that is locationally set up to incentivise new investment.”
At the same time, the renewable electricity profile has witnessed huge growth, mainly driven by onshore wind. “We are up at 56.9 per cent against our 100 per cent domestic consumption target. We’ve met our interim target of 50 per cent for 2015,” White adds.

In general, the outlook has been very good for Scottish onshore wind and renewables in the last 10 years. White indicates: “The Scottish Government feel that we have supported a conducive environment for all that investment, not only with the subsidy regime set at UK levels, but with our planning regimes. The renewables obligation was executively devolved to Scotland, so we had some power of setting rates in Scotland. We used that to set slightly higher rates in some cases, and particularly we did so for floating off-shore wind which has seen some success.”

White summaries that Scotland’s whole system approach as an attempt to map devolved policies as well as a view on reserved policies across the energy consumption profile.

“I think 2015 was, it’s fair to say, a pretty tumultuous year for the energy sector, 2016 is no more stable. The Scottish Government has assessed the changes in order to really understand the challenges and headwinds coming towards us. We took a decision to launch a new overarching energy strategy project for Scotland that would give us the opportunity to restate our priorities towards energy, refresh our long-term vision and also give us a chance to bring together all the efforts that we’ve made.”

Explaining the strategy, White states; “Our energy strategy has three core themes. We want to pursue a whole system view, where we set supply and demand as equal priorities, acknowledging the contribution of energy efficiency and demand reduction to meeting overall climate change targets. We want to have a stable, managed transition so we maximise the benefits of the low-carbon energy transformation and modernisation of our system. We also want to have a truly local approach to energy in order to apply energy solutions at the appropriate scale.”

The whole system view is; she maintains: “An acknowledgement of the complexity that we all work in. We’ve commissioned a new economy-wide emissions model. It tries to track supply and demand over time and achieve a least-cost emissions reduction pathway. We are using it first and foremost to inform our work under our new climate change plan that will come out early in the new year. That is really what our energy strategy is driven by.”

Currently, the Scottish Government has a series of building blocks for the whole system view, but their central objective is to incorporate these into an overarching energy approach

White elaborates: “The stable managed transition is about securing the economic picture, maintaining the expertise and entrepreneurship built up through the oil and gas industry in the last half century and really securing that transfer and diversification of oil and gas jobs into the low carbon sector over time. We want to realise the benefits of this approach, particular on the energy efficiency side. The aim of which would be to create more affordable energy requirements, warmer homes, increased productivity through resource efficiency and an acceleration of the economic opportunities which should come from this new, modern and transformed energy sector. We are working in partnership with our development agencies and in particular our academic institutions in Scotland, which is a core strength.”

Looking ahead, White specifies: “We will launch the draft energy strategy at the start of next year alongside our climate change plan. We are working very closely with our climate change colleagues to make energy a cornerstone of our climate change plan. It is challenging because it’s very complex and there are lots of different elements involved as well as lots of different stakeholders. When we launch the strategy we want to undertake an open public dialogue as well, and to try to launch an open style of consultation. That will hopefully be quite new and innovative for Scotland. I think just bringing all of it together for the first time in Scotland is the biggest challenge.”

Amidst the uncertainty of Brexit, White notes: “We could have stopped with our plans for a strategic energy policy, but the First Minister of Scotland has been very clear that we can carry on with business as usual. So for us, it’s about maintaining that consistency and stability in light of the Brexit discussion. We don’t know yet what future changes will come and I think we’ll just try to steer that steady path for as long as possible.”