REPowerEU: Speeding up the transition 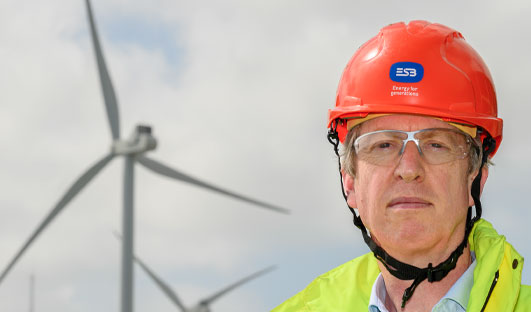 ESB Chief Executive, Paddy Hayes, talks to Owen McQuade about the company’s Net Zero by 2040 strategy and how electricity offers other sectors a pathway to a net zero carbon future.

Moneypoint power station in County Clare typifies Ireland’s energy transition from carbon to clean energy. The site has been the home of a 855MW coal-fired plant since the early 1970s. ESB is determined to stop burning coal at Moneypoint by 2025 and has embarked on a project to convert the site into a green energy hub, known as Green Atlantic @ Moneypoint. The project started with the installation of five wind turbines on the site in 2017. The next phase of the project involves the installation of a €50 million synchronous condenser – which will be the world’s largest flywheel – to help stabilise the electricity grid as increasing quantities of intermittent renewable electricity are connected. ESB also plans to build floating offshore wind turbines which will feed into a hydrogen production facility at Moneypoint. The Green Atlantic @ Moneypoint project reflects ESB’s new strategy, Driven to Make a Difference: Net Zero by 2040, which was launched in February 2022.

“In developing the strategy we went down to brass tacks and looked at the purpose of the organisation. We peeled that back to three of the UN Sustainable Development Goals (SDGs) that underpin everything we do: access to affordable, reliable, sustainable, and modern energy for all; build resilient infrastructure; and take urgent action to combat climate change,” explains Hayes, who was appointed Chief Executive of ESB in August 2021.

Hayes insists that the purpose of ESB has always been linked to the first two of those goals and since 2015, aligned with ESB’s previous Brighter Future Strategy, the utility has also focused on what the electricity sector could bring to climate action.

Meanwhile, pillar two focuses on resilient infrastructure. “As more renewables connect to the network, resilience becomes even more critical and new technologies will be needed.”

This transition of the electricity system will incorporate battery storage, as exemplified by ESB’s recent €150 million investment in a two-hour 150MW battery in Aghada, County Cork, which together with an existing 38MW battery store, will help the system to remain stable and provide additional capacity at peak times.

Furthermore, it includes the synchronous condenser at Moneypoint, which is currently under construction and will support system stability at times of higher renewables penetration. As part of this overall transition of the electricity system, Hayes also sees a role for transitionary gas-fired generation, allowing more carbon intense generation to retire and supporting system security until the infrastructure for storing and balancing surplus renewable electricity is fully developed. 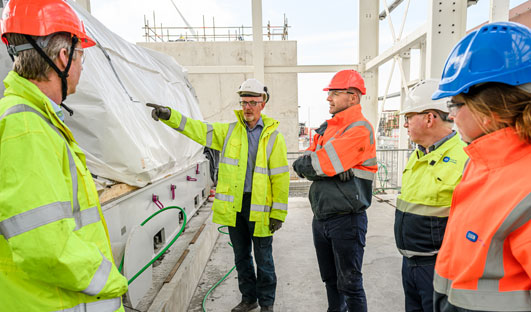 “By getting to net zero early, the electricity ecosystem will provide the clean electricity that provides other sectors with a pathway to net zero.”
ESB Chief Executive, Paddy Hayes

A key element of the electricity infrastructure that will support increased renewables is ‘balance’. “Further investment in renewable generation will mean surplus clean electricity at certain times,” the ESB chief explains, adding: “There will also be periods when the wind does not blow. The key challenge, therefore, is to take that surplus clean electricity and to store or convert it so that it can be used when it is needed.

“That long-term system balancing aspect is crucial to achieving higher percentages of renewables on the system and, ultimately, a net zero electricity system.”

Hayes believes that consumers can also play a part in this system balancing. “A pilot project with smart meters identified that engaged customers were not only able to reduce their electricity usage by 2 to 3 per cent but could also shift as much as 9 per cent of their demand from peak times. Shaving demand or shifting it from the peak and moving that demand to when there is surplus clean energy, could have a significant benefit in terms of both cost and carbon.”

The third and final pillar of the strategy is to help customers use clean electricity to decarbonise other sectors, such as heat or transport. ESB has partnered with Tipperary Energy Agency to establish Electric Ireland Superhomes, assisting people to retrofit their homes so they can use electricity for heating via heat pumps. On the clean transport side, ESB plans to double the amount of public EV charging points it owns and operates. Along with the expansion plans of other charging point providers, this will support the Government’s ambitious objective of accelerating the number of electric cars on Ireland’s roads and supporting customers and communities to decarbonise their transport. 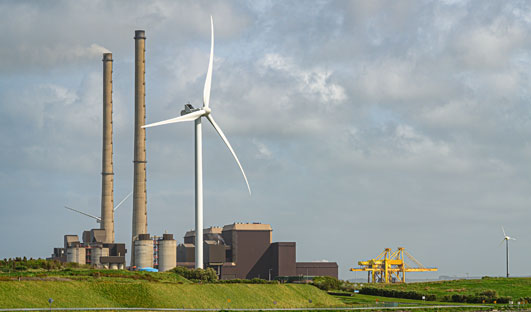 “…there is so much to be done and climate action is the challenge of a generation. It is so important to reach out beyond ESB and collaborate with other industry players and organisations outside the sector.”

Within ESB, in recent years, there has been a significant emphasis on engaging customers in the energy transition. In 2021, ESB Networks embarked upon an innovative three-year pilot project on the Dingle Peninsula, or Corca Dhuibhne, County Kerry investigating how customers and communities will engage with clean energy and technology and find ways to play their part in climate action.

“We saw individuals putting solar generation on their roofs and using the electricity from those to charge their electric vehicles. Other people trialled vehicle to grid chargers, allowing their electric car battery to offer power back to the grid at peak times. This community-based pilot showcased many examples of domestic, farming, and small business customers becoming much more involved in clean energy production and use. Appreciating how people will interact with the different technologies and the take up of clean electricity is so important and, given ESB Networks’ role, the learnings and data from this innovative pilot will be reported publicly and made available to all,” Hayes reflects.

Increased investment is required for the clean energy transition and that is reflected in ESB’s strategy. ESB’s rate of capital investment in infrastructure for a number of years was around the €1 billion mark, increasing to €1.4 billion in 2021, and will increase further to €1.7 billion for the 2022. Ultimately, Hayes expects the rate of investment to increase to €2 billion by the end of the decade.

Underpinning ESB’s strategy are a number of ‘foundational’ capabilities, which, Hayes emphasises, are critical for ESB.

Importantly, ESB is “challenging itself to step forward on sustainability and social responsibility. And that is a big challenge as we have a wide operational footprint, with lots of scope for improvements and opportunities to make a difference. It is important that we constantly reduce the environmental impact of our operations.”

Another key capability underpinning the strategy is digitalisation, and ESB is accelerating its digital and data-driven approach. “This is a real opportunity to make a difference, particularly in our contact with customers,” the ESB chief suggests.

“This will require a complete transformation of the electricity distribution system, a quiet transformation, with digitalisation playing a key role in facilitating the cost effective electrification of heat and transport and supporting customers who want to have their own microgeneration and storage, or who want to offer power back to the grid.”

While much of the focus in the energy sector is on hard infrastructure, ESB has just started a recruitment drive and Hayes highlights the importance of people with relevant skills to support the investment in infrastructure and technology. Another critical aspect of the people factor is culture. When asked to define the culture of ESB, Hayes replies: “Firstly, there is a real sense of purpose and service for customers and communities. That has evolved through years of ‘keeping the lights on’ and has expanded to include urgent action on climate change, reinforcing that original sense of purpose and the drive to make a difference.

“Secondly, it is a sense of openness and inclusivity. My personal experience has been of a really welcoming organisation. Maintaining that sense of inclusivity is a priority. The nature of our operations means that we work in and with and provide services to every community so maintaining that sense of inclusion and purpose will help us to work with customers and communities to get to net zero.”
Insisting that ESB has been very innovative over the years, albeit sometimes “in a quiet way”, Hayes contends that it is increasingly important that people see that they are joining and working in an innovative organisation with a real sense of purpose. This is particularly pertinent in the context of talent management challenges now prevalent across all sectors. 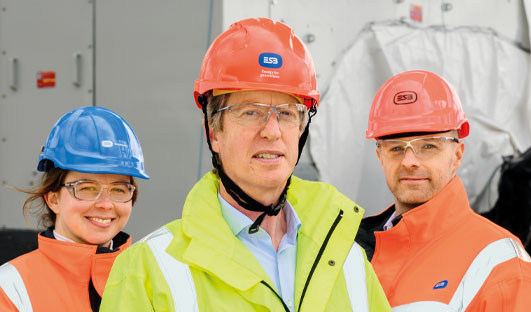 Overall, ESB is an organisation that has changed considerably in the 25 years since the electricity market in Ireland opened up to competition. Today, amid the climate challenge, and against a backdrop of rapidly evolving technologies, it is a different world that requires a different approach.

“We acknowledge that there is so much to be done and climate action is the challenge of a generation. It is so important to reach out beyond ESB and collaborate with other industry players and organisations outside the sector. The electricity system is transforming rapidly and everyone will have a part to play, from other electricity generation and supply companies, researchers, and academics to the offshore industry, and the chemical industry for hydrogen production and energy storage. Developing a much wider range of skills and complementary capabilities will be critical to the ultimate delivery of net zero.

“Similarly, we are likely to see, and to need the input of, companies that do not yet exist or are just emerging, including aggregators of supply and demand, while customers and communities will also play an increasingly important role,” he adds.

Hayes believes that given the range and complexity of the developments that will be required to develop the future electricity ecosystem, joint ventures (JVs) will become the norm. His experience with Synergen, which was a joint venture between ESB and Statoil, has been central to this thesis.

“I saw what can be achieved when you have two partners with complementary capabilities and a shared vision, and I think JVs and partnerships will be central to what we do in future in both offshore and onshore wind, in solar and in energy storage.” This perspective was reinforced during his time leading ESB Independent Generation, which invested in many power plants as joint ventures, including the Corby Power Station in the UK, with German utility EON, while Amorebieta Power Station in northern Spain was a JV with Osaka Gas of Japan.

“A co-operative and collaborative approach, that feeds directly into our culture is so important. In addition to being inclusive and innovative, there is much to gain from being more open and collaborative. The prize is not being the biggest or the first but, together, achieving net zero.

“By getting to net zero early, the electricity ecosystem will provide the clean electricity that provides other sectors with a pathway to net zero. To deliver net zero in time, it is critical that we remain open to working with others and doing things differently,” he concludes.