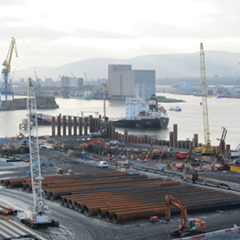 As offshore wind energy starts to accelerate, Belfast Harbour is leading the UK in developing port facilities for the sector.

Construction of a 50-acre assembly and logistics base for DONG Energy and its partner, ScottishPower Renewables, began last year and is scheduled for completion in Quarter 4, 2012. The facility, the first bespoke terminal of its kind in the UK, represents a £50 million investment by Belfast Harbour – the largest ever in the Harbour’s 400-year history.

Historically, the Harbour’s policy of investing to diversify brought shipbuilding and aerospace to Belfast. In the 21st Century, the Harbour is keen to do the same with offshore renewables and other Cleantech generation industry.

Industry estimates suggest that over £100 billion of investment in offshore renewable energy will be needed to achieve the UK target of 20 per cent renewable electricity by 2020; Northern Ireland’s own target is 40 per cent. This investment will provide for the construction of up to 11,000 offshore wind turbines in UK and Irish territorial waters. Even if those aims are too ambitious, Belfast Harbour Commercial Director, Joe O’Neill does not see any other industry offering “such a growth opportunity in such a time period”.

Up to a quarter of the turbines planned for British and Irish waters fall within 150 nautical miles of Belfast; that’s 2,500 turbines representing a total investment of circa £25 billion.

The new industry leading facility at Belfast Harbour will be leased on a long term basis to DONG Energy, the world’s most successful offshore wind developer, having built five of the world’s ten largest offshore wind farms to date. The facility will serve as DONG’s offshore logistics and assembly base for its three offshore wind farms in the Irish Sea, for which it received consents from the Crown Estate. DONG Energy also hopes to play a role in other future developments in the Irish Sea, including the soon to be licensed Northern Ireland Territorial Waters which will see a 600MW wind farm being developed off the coast of County Down.

“Developers, up to now, had only been taking one step at a time working on a project by project basis,” he comments. The sector, however, is increasingly realising that as a result of its demanding and often unique requirements, it needs to form long-term partnerships with ports and provide commitments which will enable the ports to undertake the necessary investment. “As we see it, DONG Energy was the first project developer to take the long term view and the result of this is the development of this new facility in Belfast Harbour.”

“Speed to market is one of the absolute essentials for manufacturers and developers if they are to contribute to Government meeting its renewable targets,” he comments. “Belfast Harbour was able to offer a fast-track turnkey solution for DONG Energy, benefiting as it did from its strong and positive stakeholder relationships and its ability to self-finance the £50m project entirely off its own balance sheet.

“DONG Energy recognised those key attributes, along with the Harbour’s recent track record of delivering similar large-scale investments on time and on budget. “Our ability to offer such a timely solution to DONG Energy provides a very positive backdrop for approaches to other developers and/or manufacturers as we seek to establish a marine energy cluster for Northern Ireland.”

Attracting DONG Energy gives Belfast Harbour a strong advantage marketing prospective development lands within the Harbour area, and provides an entry point for Northern Ireland companies to access the vast offshore wind supply chain. Drawing an analogy with a shopping centre, he says that the anchor tenant is in place and the harbour is now seeking to “build up all the other shops that feed into that anchor development.”

Construction of the new terminal, being carried out by Northern Ireland-based Farrans Construction, has already created 150 jobs, will take 750,000 man hours to complete and has brought demands for 1m tonnes of stone from local quarries.

Further port related opportunities in the sector lie in O&M (operations and maintenance of the offshore wind farms), and manufacturing of wind farm components be it turbines, foundations, cables and so on. The sheer size and scale of an offshore wind turbine means that this kind of manufacturing can only take place in a port side location. It is thus of great importance, that around 150 acres of land is available immediately around the DONG Energy site to accommodate spin-off industrial sites.

Other Belfast Harbour tenants have already and will continue to play a vital role in establishing Belfast and Northern Ireland’s credentials in the sector. Harland and Wolff has already diversified into offshore wind farm logistics and major component manufacturing, including foundations, tidal devices and building offshore wind farm sub-station platforms; it has a huge physical capability in its building docks, cranes and supporting land.

Belfast’s aerospace industry can provide an edge in skills for the offshore sector. Bombardier has significant experience in composites and (along with Queen’s University, the University of Ulster and Wright Bus) has established a new composite centre less than a mile from the DONG Energy site. Specialist training courses for offshore technicians will be provided at Belfast Metropolitan College’s Titanic Quarter campus.

“If we combine all of our manufacturing heritage, highly skilled resource, leading-edge research in sectors related to the offshore sector and Belfast Harbour’s capability to fast-track and deliver significant large scale developments,” he explains, “we think we’ve got a winning cluster potential here.”

Offshore wind, in itself, is not a new sector, but it promises to take off on a “phenomenal scale” as the UK develops the wind farm capacity recently licenced by the Crown Estate. In comparison, wave and tidal energy is “at an embryonic stage”, but Belfast is also well-positioned to take advantage of its growth. O’Neill points to the Northern Ireland Science Park and the excellent R&D work undertaken by Northern Ireland companies and academia.

“Belfast Harbour wants to act as a bridgehead for the renewable sector in Northern Ireland. Securing DONG Energy and ScottishPower Renewables is a major coup and something we want to build on.

“We’re already in serious discussion about a number of other, major related projects which, if they come to fruition, will really put Northern Ireland on the renewables map. It’s exactly the sort of high-value add sector Northern Ireland needs to develop to strengthen its economy. We’re on the cusp of a very exciting opportunity which could be a major boost for both Belfast Harbour and the wider economy.” he added. 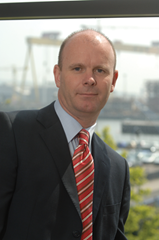 Joe O’Neill is Belfast Harbour’s Commercial Director. A biochemistry graduate from Queen’s University Belfast he started his career in the food and drink sector. After completing an MBA Joe joined Undus Limited a trading company which traded goods between Ireland and Russia. In 1997 he started at Belfast Harbour as a business development executive progressing through commercial manager and port manager posts before attaining his current position.

His interests include cycling and keeping fit.