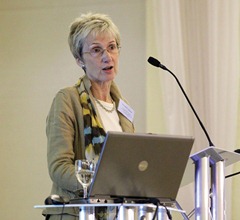 A research forum and clearer information on bioenergy’s benefits are among the sector’s suggestions to government, Barbara Swann outlines.

As a bioenergy action plan awaited Executive approval, Barbara Swann from DETI’s Sustainable Energy Branch updated delegates at an agendaNi seminar on the feedback received in its consultation last year.

The draft action plan was drawn up by an inter-departmental group on bioenergy, led by DETI. Its final version will incorporate the key actions from the June 2010 DARD Renewable Energy Action Plan.

Over 30 responses were received. On the first objective, raising awareness and understanding, consultees welcomed the cross-departmental approach but said specific targets needed to be set. Some saw public procurement as a key driver.

A large-scale biomass generator was also proposed, to help stimulate the local market. This would release energy for the grid but would initially need to rely on short-term imports to keep up the fuel supply.

A lot of misunderstanding still surrounded the sector, with many people associating bioenergy with noise, waste and smell.

Consultees wanted government, the private sector and elected representatives to understand the sector better. DETI is preparing an “overarching message” on sustainable energy, which will include case studies of the different renewable sectors.

To help create a “supportive and enabling environment”, DETI has also completed a study on the potential for renewable heat in Northern Ireland, to be published later this year.

The benefits of PPS18 were acknowledged but consultees felt that government should be doing more and giving more publicity to what is already being done. Swann confirmed that DFP procurement staff were already working to set up trials in the health, schools and government estates, but she cautioned that there were limits on what can be done.

Strong views were expressed on the environmental impacts of bioenergy and growing more biomass crops.

A third aim was to facilitate targeted investment in key areas of the supply chain. There was a desire to see small local players working together and also more ambitious forest planting. DETI is consulting on increasing the number of renewable obligation certificates (ROCs) for biomass.

Separately, there was an ongoing debate over whether the Northern Ireland Renewables Obligation or feed-in tariffs were best. Minister Arlene Foster is keen to take the potential cost to the consumer into account.

Finally, to promote “focussed R&D”, a bioenergy research forum was suggested by consultees. This would bring existing work together at a time when funding was limited, and avoid ‘re-inventing the wheel’.

Swann emphasised that not all suggestions could be acted upon nor could all the final actions be delivered as quickly as anyone would want.

“It’s not as if we’re trying to do everything in year one,” she remarked. “It’s a difficult current economic climate where we need to focus our efforts [and] create the right environment in which bioenergy can develop.”

While most energy policy is devolved to Northern Ireland, the inter-departmental group also contributes to UK-wide debates on bioenergy. British energy policy is currently in flux, after the general election, but is expected to become clearer after the Comprehensive Spending Review.

The Coalition Agreement promises to “promote a huge increase in energy from waste through anaerobic digestion.”

Other specific commitments on energy include establishing a smart grid and rolling out smart meters, a full system of feed-in tariffs in electricity as well as keeping banded ROCs, a floor price for carbon and an annual energy statement to Parliament.